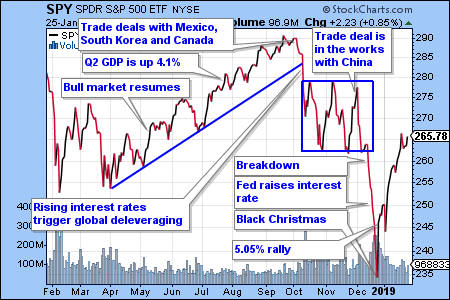 Figure 1. The S&P 500 index partially recovered in January from the steep sell-off that started in October of 2018.

The major drivers for the weakness in equity markets, such as rising interest rates and a trade dispute between the U.S. and China, are still unresolved. Therefore, we think that volatility is likely to continue in Q1 2019.

In our view, the best investment opportunities right now are in emerging markets: 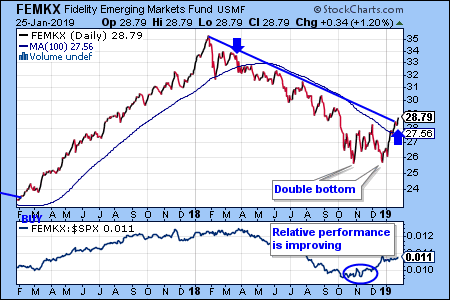 We especially like the Southeast Asia region based on relative performance: 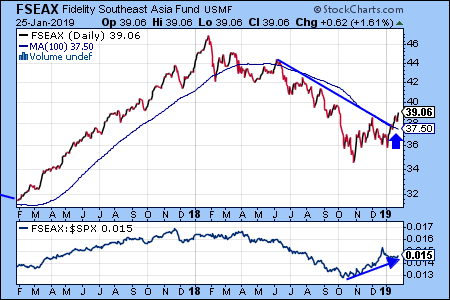 In our June blog post we warned about the rise of geopolitical risks and their impact on international markets. In the summer, one of the main concerns was the potential exit of Greece from the Euro Zone. While the exit did not happen, the continued weakness of the Greek equity market (GREK) shows that Greece is not yet in a better shape than before, and it is likely that the question will have to be addressed again in 2016. 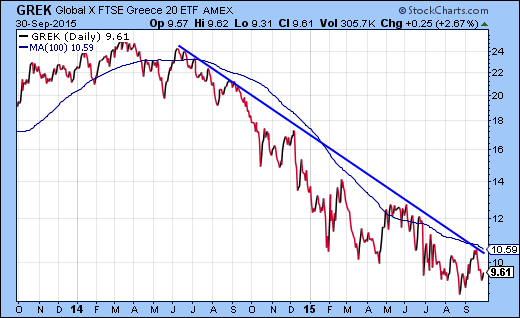 Our current concern is the weakness of the German market, which is the largest and strongest economy of Europe. To illustrate the concern, lets take a look at two German bellwether stocks, Volkswagen (VLKAY) and Deutsche Bank (DB).

The chart below shows that the highly publicized “Dieselgate” emissions scandal has caused a more than 50% drop for the Volkswagen stock so far. With litigations just starting up and the recall for the diesel cars still not available, we see the weakness to continue for the near term. The chart of Deutsche Bank is also very bearish with a recent technical breakdown below the support level. 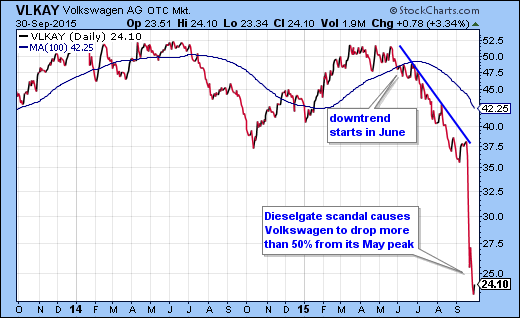 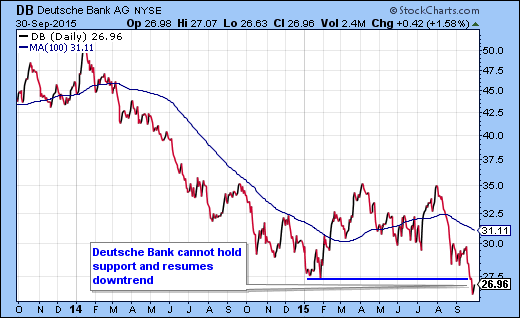 The chart of the German equity market shows a similar negative pattern:

Besides the weakness of the German market, Europe has two additional problems that will have to be resolved before we can turn bullish again. The first is the concern about the effectiveness of the quantitative easing program with the ECB starting to hint again at the need for a new round of money printing. The second concern is the economic impact of the flood of immigrants and the political tensions it created in the Euro Zone. 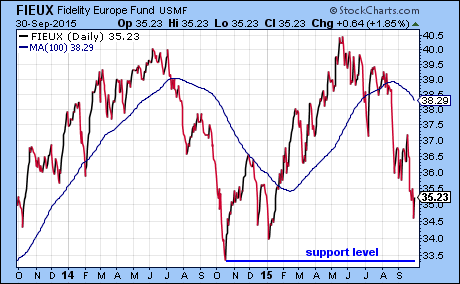 Our second topic is the impact of the bear market in natural resources, such as oil, on emerging markets that are net exporters of raw materials. The chart of the Fidelity Natural Resources Fund (FNARX) shows that the bear market resumed in late summer and downside volatility is very high: 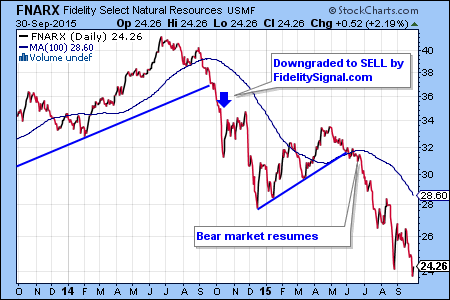 It is not surprising to see that equity markets in Latin America and in Asia are also in a steep decline: 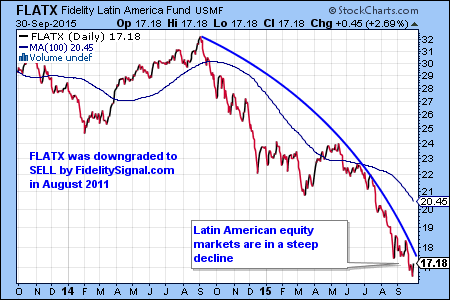 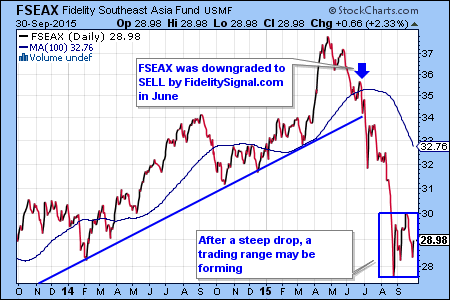 Geopolitical risks are on the rise again with weakness in European markets due to the intense negotiations around the potential exit of Greece from the European monetary union. The negative performance of the Greek stock market reflects the uncertainty about the outcome of the negotiations: 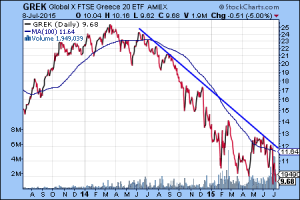 In addition to Greece, the sudden and dramatic selloff of Chinese stocks has the potential to destabilize international markets. A-shares, which are traded in Mainland China at the Shanghai and the Shenzhen Stock Exchanges, are impacted the most, while shares in Hong Kong are holding up relatively well: 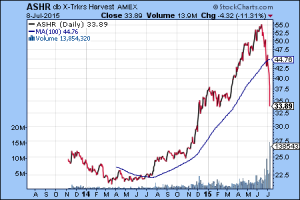 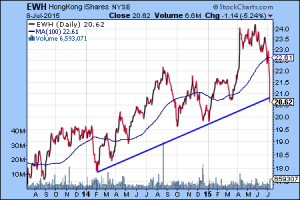 As the result, most Fidelity mutual funds that invest in international markets are no longer trending higher. Examples include the Southeast Asia Fund (FSEAX), the Emerging Markets Fund (FEMKX) and the Diversified International Fund (FDIVX): 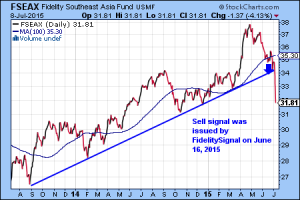 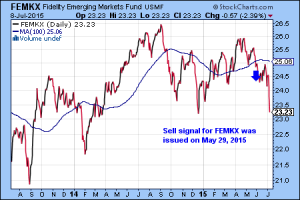 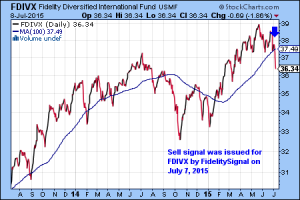 In our previous article we wrote about the potential of the natural resources sector to further rally and to provide market-leading results in 2015. Unfortunately the selloff in the Chinese market, which is a major consumer of commodities, caused an unexpected reversal. The chart of the Select Natural Resources Fund (FNARX) shows the sudden reversal of the emerging bullish trend: 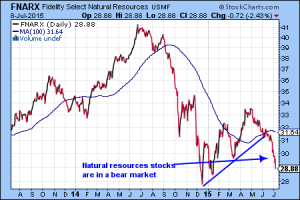 The FidelitySignal Aggressive Growth strategy continues to outperform the market in 2015. The current asset allocation is as follows: 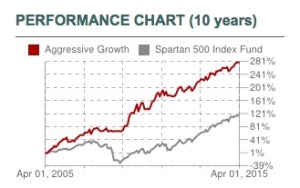 Increased volatility in the materials sector resulted in a sell signal for the Fidelity Select Materials Fund (FSDPX) and the fund was removed from the portfolio: 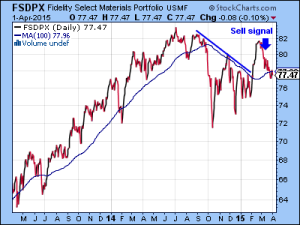 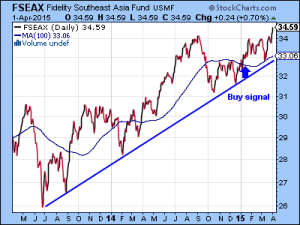 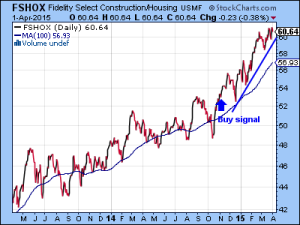 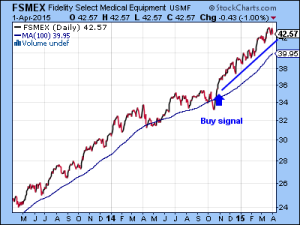 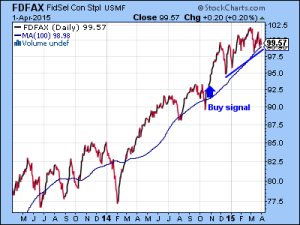 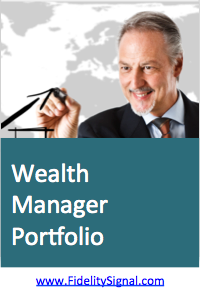