Global markets started out on a good note in the morning, but reversed by the afternoon. One of the few bullish international markets, the Brazilian stock market, broke out of the trading range in the morning due to the election win of an anti-establishment presidential candidate. Unfortunately, the gains turned negative by mid-day and closed below the close of the previous day on high volume. This price pattern is called the bearish outside reversal, not a good sign for Latin American markets.

Argentina and Mexico, the other two large Latin American markets are already in bear market territory: 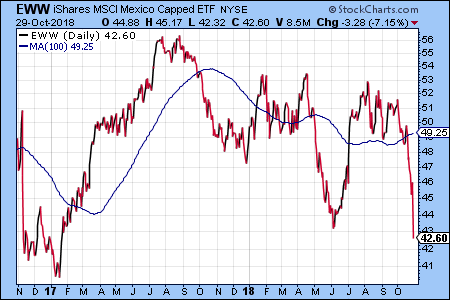 European markets are also declining steeply. Interestingly, following Angela Merkel’s statement about not seeking re-election as her party’s leader resulted in a small rally in German equities. In spite of that, the stock market of the strongest economy in Europe is clearly in a negative trend:

Another disappointment was the performance of the technology-heavy Nasdaq index. The chart of the Nasdaq 100 tracking ETF (QQQ) shows the same bearish outside reversal pattern:

The large-cap S&P 500 index is also deteriorating and seems to be heading to the February low:

Looking at the relative performance of sectors, the results are unusually negative with only a handful of sectors producing small positive returns over the last three month period:

Perhaps the only sector that is in a reasonable uptrend is utilities, which in our interpretation shows a very defensive investor sentiment:

In our survey, the semiconductors sub-sector is the weakest, and we think that it still has room to fall:

On the other hand, materials, another lagging sector, is highly oversold based on the RSI indicator and could be ready for a short covering rally:

One thought on “Global Stock Markets in Turmoil; Crash-like Conditions can Develop Unless We Get a Bounce Soon”