It is always good to take a look at long-term trends when short-term volatility increases, in order to have a better sense of the market direction. While the widely anticipated stock market correction remains a possibility, in our view, the long-term bullish trend for U.S. equities is still intact.

The chart shows that the multi-year uptrend for the benchmark Fidelity Spartan U.S. Equity Index Fund (FUSEX) has not yet been interrupted by the recent market volatility:

In a recent article (see Best Fidelity Mutual Funds for 2015) we highlighted the most attractive investments for 2015. The selected mutual funds have continued to perform well in the last few weeks of trading. Especially, conservative sectors, such as real estate, utilities, medical equipment and consumer staples have outperformed the S&P 500 index: 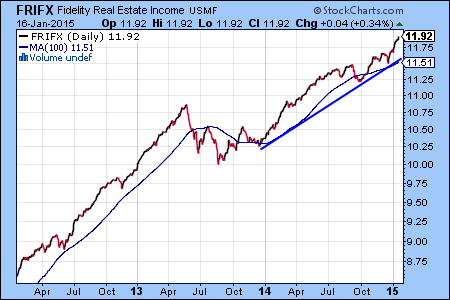 Perhaps, the most interesting new development in 2015 is the renewed interest in buying gold mining stocks. The chart of the Fidelity Select Gold Fund (FSAGX) below shows a short-term bullish double bottom pattern and increased buying activity during the first two weeks of the New Year. However, gold has a long way to go before it can establish a long-term uptrend.

While gold is traditionally viewed as an inflation hedge, in the current deflationary environment precious metals are looked at as an alternate asset class that can potentially serve as a volatility hedge. We’d like to caution investors, that while gold can provide returns that have low correlation with equities, this sector is highly speculative and is more appropriate for the purposes of short-term trading than long-term investing. 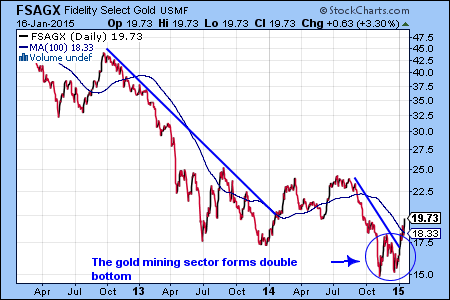 As noted in earlier articles, we believe that it is still too early to diversify into the weakest sectors, such as natural resources (in particular energy), and into underperforming international markets.

The blue lines on the charts of the Fidelity Select Energy Fund (FSENX) and the Fidelity Latin America Fund (FLATX) indicate that the bearish downtrends that are still in place: 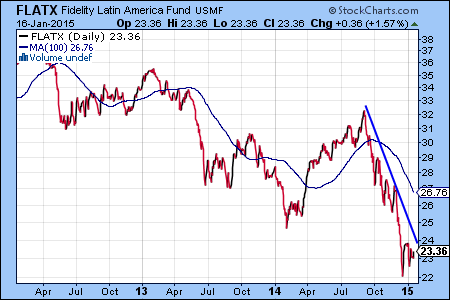 Read more about investment strategies involving these funds at FidelitySignal.com

The slowly improving U.S. economy and low interest rates have created a favorable environment for real estate investments. The Select Construction and Housing Fund (FSHOX) and the Real Estate Income Fund (FRIFX) are two excellent Fidelity funds, which allow investors to participate in this trend. The blue arrow in the top panel of the chart below shows that FSHOX has a positive relative strength compared to the S&P 500 index, because FSHOX has outperformed the S&P 500 index since August of 2014. Similarly, FRIFX has outperformed the benchmark Fidelity Spartan U.S. Bond Index Fund (FBIDX). 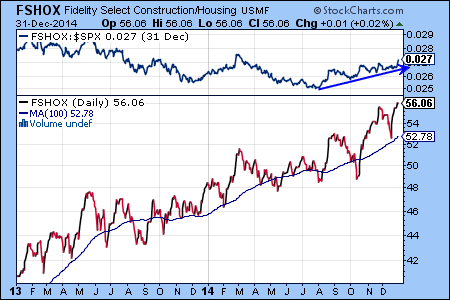 As the U.S. economy continues to improve, the Fed may start to increase interest rates in late 2015 or early 2016. In a rising interest rate environment bond investors may find it increasingly difficult to identify income funds that do not decline in value. As an example, the Fidelity High Income Fund (SPHIX) has already started to decline: 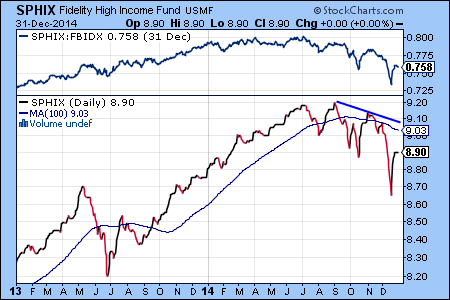 Two income funds that can outperform in 2015 are the Fidelity Spartan Municipal Income Fund (FHIGX) and the Fidelity Mortgage Securities Fund (FMSFX). The current yield of FHIGX is 3.54%, while FMSFX yields 2.49%.

Style rotation refers to the periodic over and under performance of different investment styles, such as growth vs. value, or large cap vs. small cap. For most of 2014 growth has outperformed value investing, and large caps have outperformed small caps. In 2015, we think that these relative trends can easily reverse. Two Fidelity funds, which can help investors to participate, are the Fidelity Value Fund (FDVLX) and the Fidelity Low-Priced Stock Fund (FLPSX): 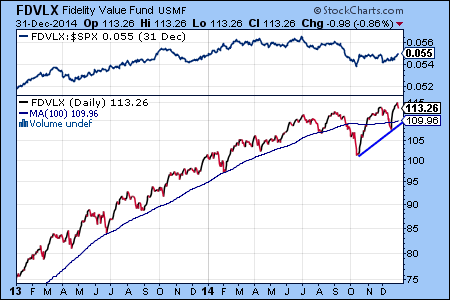 Investing in gold mining stocks can provide an attractive opportunity for portfolio diversification. Of course, the best time to invest in the gold mining sector is when it is not declining. Unfortunately, that is not the case right now. However, should this trend reverse, the Fidelity Select Gold Fund (FSAGX) is an excellent mutual fund for investing in this sector.

The history of the stock market shows that the weakest investments in one year can often become the best performing investments a year or two later. However, looking at natural resources and international stocks, the two weakest investments areas in 2014, we think that they likely to continue to decline in early 2015, therefore it is too early to accumulate an investment position. 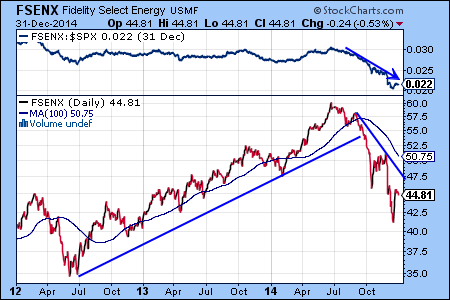 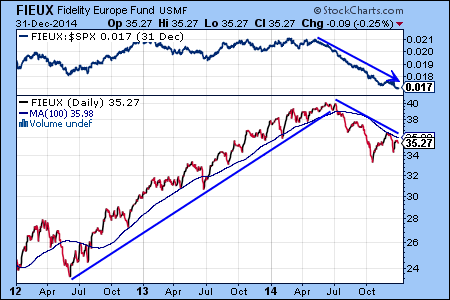 Read more about investment strategies involving these funds at FidelitySignal.com

Seesaw market action today resulted in the Dow Jones Industrial Average briefly reaching an all-time high level before pulling back at the end of the trading session. Perhaps the most disappointing is the performance of companies in the social media and biotechnology sectors. These sectors led the bull market last year, but they no longer appear to be in in favor with investors.

While market volatility and sector rotation can be confusing on the short run, it is worthwhile to take a look at the long-term picture from time-to-time. The five-year charts below show three excellent Fidelity funds (FNARX, FSNGX and FSENX) that invest in the natural resources sector. This sector includes natural gas, oil and other energy sources, in addition to metals and materials stocks.

The charts show that the natural resources sector resumed its long-term uptrend last July, which coincided with an about 10% increase of crude oil prices. This positive trend is also supported by the American energy renaissance, which includes the development of unconventional and alternative energy resources.

While stocks of natural resources companies can be volatile, this sector continues to be an attractive choice for investors seeking diversification in 2014, because both the fundamental and the technical drivers are in place.

Buy and sell signals are available at FidelitySignal.com